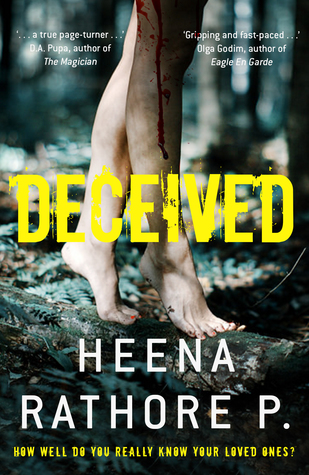 Deceived is a psychological thriller and horror book by debut author Heena Rathore P. It follows the story of four characters and the book switches between their perspectives. Elizabeth is on the run after brutally killing her parents. Allison’s mother and brother were murdered and she is still haunted by it. Steve is trying to find the truth about their deaths and chasing a serial killer. Michael is a psychopath who is seeking revenge.

The book starts with a foreword by Patrick H. Moore about the difference between sociopaths and psychopaths. I think the purpose behind this was to make us think what the characters were among these terms as the story moved on.

The plot of this book is very interesting. Its a few years later and Allison hasn’t gotten over her mother and brother’s death. Nightmares plague her but she finds solace in the fact that she’ll soon move in with her boyfriend Danny. Danny seems like a perfect boyfriend but I could see from the start that he’s far from it.

All the story lines were equally gripping and I couldn’t wait to see how they were connected to each other. The events in the book are very chilling. They even made me paranoid and I was honestly scared for Allison. As the book progresses, it just gets more and more messed up. I started making a list of suspects in my head. The mystery is very intense and I needed to know how everything was connected. There were so many questions in my head and the mystery was killing me. It made me suspect each character.

I absolutely loved the writing! It was very captivating and exactly the kind of writing I love.

Allison loved books. I loved her dog Max and I loved how she took him everywhere she went. I feel really bad for her. She was innocent and had already suffered so much but was always in danger. However, I didn’t like that she put too much trust and relied so much on Danny. She seemed too naive at times. She ignored so many signs that she might be in danger.

Steve is Allison’s cousin. He’s a journalist and is trying to investigate his aunt’s murder. He care for Allison is very determined in his find out the truth.

Elizabeth was an extremely violent child. Her parents are horrible to her and she eventually ends up slaughtering them. I felt sympathetic towards her because of what happened to her but its undeniable that she was sick in the mind.

Michael is a psychopath who is after Allison. The book shows us his journal entries. He was actually very scary and I felt afraid for Ally.

The book also tries to say everyone has a story. Some have a good one, some a bad one and some a downright crazy one.

I have never before read a book that drove me crazy with the mystery. It was really unpredictable and I couldn’t see where it was going. The more I read, the more I wanted to know what would happen next. It got really chilling at times.

At the end, all the pieces fit together like I never imagined they would. I don’t know whether I like how it ended or not. It left me completely stunned.

This book is an absolutely insane read. It has misery, revenge and psychopaths. I have never read something so messed up before. It is scary, thrilling, mysterious and keeps you glued to it. The plot was amazing. The multiple story lines format was done very well. It didn’t get confusing at all.

This book is a phenomenal debut. It is unpredictable, unique and very thrilling. I will say its not for everyone since it gets really violent at times. Its a must read for fans of horror and psychological thrillers. I’m glad I read Deceived and I’m looking forward to reading the author’s next book.