Genre: Young Adult, Fantasy
My Rating: 4.5 out of 5 stars

Magnus Chase was sleeping peacefully under a bridge (or as peacefully as a homeless teenager can) when his friend Blitz kicked him awake and told him to run for his life. He meets his Uncle Randolph who informs him that his long-lost father is a Norse god. He doesn’t think things can get any weirder until he dies.

This book wasn’t very original.
It wasn’t very different from Rick Riordan’s other works.
But it was good all the same.
There were many parallels between this and the Percy Jackson series but i still found it hilarious and witty and over-all a fun read.

Magnus is funny and sarcastic. Samirah is intelligent and brave and I absolutely loved Blitzen and Hearth – the fashion-crazed dwarf and the sweet deaf elf.

The Norse mythology was interesting and didn’t make the book dull or confusing. The whole boy-finds-out-about-his-real-self-and-saves-the-world thing was predictable but it didn’t ruin the book for me.

Also, the quirky and hilarious chapter titles were probably one of the best things about the book. 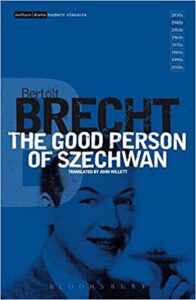 The Good Person of Szechwan by Bertolt Brecht, translated by John Willet

Nikola Tesla: Imagination and the Man That Invented the 20th Century by Sean Patrick (Kindle freebie) – A short motivating read

0 thoughts on “Book Review: Magnus Chase and the Sword of Summer by Rick Riordan”