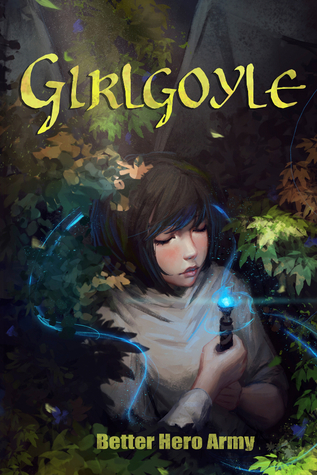 Girlgoyle is the story of 14 year old Tiffany who is killed in her bedroom by a ghost called Bones. The story continues as she is immersed into an unfamiliar world filled with gargoyles.

The plot isn’t very complex but it is intriguing regardless. It is different than anything I’ve read before and felt quite refreshing. The book gives a dark vibe and their are scary things happening right from the beginning. It also has beautiful illustrations that just add to the overall effect the book gives.

In the beginning, the book is a little slow paced and I couldn’t see where it was going. Eventually, it started getting more  interesting and kept me wondering what was going to happen next. It was not very predictable either. I was surprised to see a bit of a boarding school theme in the book as well. At times, the events get quite scary.

The writing was excellent. I also really liked the world created by the author. It is a world of gargoyles which is fascinating and something new for me. I constantly wanted to know more about it and wanted to see more world building.

I liked Tiffany’s spirit and bravery. However, it did seem unnatural that she wasn’t too freaked out at finding herself dead in an unfamiliar place with wings. At first, everything is too hard on her. She’s under a lot of stress and faces a lot of changes in her life. Despite all this, she doesn’t crumble at all.By the end, I felt attached to her and started to root for her. I wanted to know more about her and see more development in her character. We also see her struggling with some issues such as insecurity, bullying, and body image.

Other important characters in the book are Franklin and Hedika. Franklin is a little cold and uncaring in the beginning but we eventually see a softer side of him. Hedika is a girl that Tiffany befriends. I really enjoyed seeing them together. There is also the ghost Bones who is the villain in the book. He is the one who kills Tiffany and the fight in the book is against him.

The book is overall a very enjoyable read. It is perfect for Halloween or if you are just looking for something dark and creepy. It is a good start to a series that has  potential to be something huge. I recommend it especially to those who like dark paranormal YA.