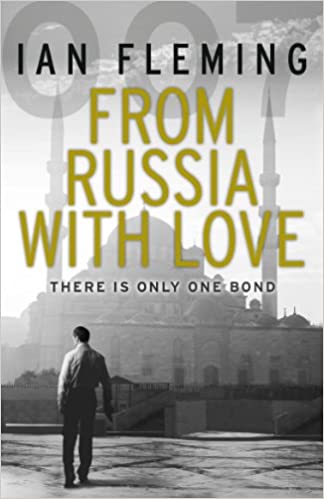 James Bond is marked for death by the Soviet counterintelligence agency SMERSH in Ian Fleming’s masterful spy thriller. It’s the novel that President John F. Kennedy named as one of his favourite books of all time.

SMERSH stands for ‘Death to Spies’ and there’s no secret agent they’d like to disgrace and destroy more than 007, James Bond. But ensnaring the British Secret Service’s most lethal operative will require a lure so tempting even he can’t resist. Enter Tatiana Romanova, a ravishing Russian spy whose ‘defection’ springs a trap designed with clockwork precision.

Her mission: seduce Bond, then flee to the West on the Orient Express. Waiting in the shadows are two of Ian Fleming’s most vividly drawn villains: Red Grant, SMERSH’s deadliest assassin, and the sinister operations chief Rosa Klebb – five feet four inches of pure killing power.

Bursting with action and intrigue, “From Russia with Love” is one of the best-loved books in the Bond canon, an instant classic that set the standard for sophisticated literary spycraft for decades to come.

It’s been a while since I read a thriller and I had forgotten how, well, thrilling the reading experience can be. Unfortunately, I only felt that way for about 20% of the book.

Fleming’s writing style instantly gripped me. I knew this was going to be a book that wouldn’t hold back on painting a picture for me – something I notice in most fiction from the 20th century.

Thriller, especially crime thriller, is a genre I don’t gravitate towards a lot. Because of this, it was difficult to keep on reading this book, especially in the beginning. I didn’t care for most of the secret agency stuff. I enjoyed reading about Grant and his serial killer personality though.

The first scene in which Grant is introduced is captivating. However, it went downhill from there and I found the next couple of chapters a complete drag. I did enjoy the book more when James Bond was introduced and later, when he met Tatiana.

Also, this book is very racist and sexist and that certainly didn’t help me with continuing reading it.

Find the book on Goodreads | Amazon

Happy Here and Now: Lasting Happiness You Can Count On by Matt Tracy – Book Review