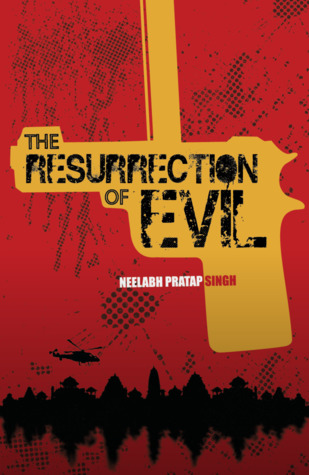 The Resurrection Of Evil by Neelabh Pratap Singh is a mythological thriller set in India. The plot is centered around a pot that is stolen from the National Museum.

The book starts with a man killing his wife in a moment of anger. Right after this, we are bombarded with crime scenes one after the other. In the middle of these, we are introduced to our hero ACP Aryan.

I liked how the book begins. It sets the mood for an action-packed book. One of the first things I noticed is the excellent writing. It was absolutely perfect and something you wouldn’t expect from the debut novel of an author. The dialogue was also very well written and it fit well with the book.

At first, I thought this book was just a crime thriller and I couldn’t see how the mythology would fit into it. The plot kept on getting more and more complex. It goes back and forth between various perspectives. There were unexpected events at every turn and it seemed like an endless race. It is also very unpredictable. I  liked the clues that were given in the form of poems. They made the plot even more interesting and added a touch of drama. Even with so many things happening, it never got difficult to understand what was going on. There were different strings of the story that all lead back to one place. The pace of the book wasn’t extremely fast like one would expect from a thriller. Because of this, I could take my time enjoying the book.

I liked Aryan right from the beginning. He was brave, sarcastic, clever and dedicated. He had a great sense of humor. We also see him struggling with his personal life. It adds a more personal touch to his character and makes us feel more attached to him.

The Indian mythology plays a huge part in the book. I was surprised to see a bit of Irish mythology as well. I really liked the concept of explaining ancient myths with today’s logic and technology. Even though the mythology was explained in a simple way, it w
as still hard for me to keep up with it. At times, I found myself just reading it and not really understanding.

The book is literally a race where the sole aim of the characters was the pot while they were also struggling with their own lives. There were a number of villains in the book and it would be so frustrating whenever one of them would get away. I honestly though they were a bunch of lunatics seeking revenge for nothing.

Neelabh Pratap Singh is indeed a great storyteller. The book isn’t like one of those crime thrillers that are highly intense and I liked it that way. The ending was a great unexpected twist. There were surprising revelations happening right till the very last pages. The author created a brilliant plot. I liked how the mythology plays a huge part in the book but ultimately it is the reality that matters. I was glad to see their were no loose strings left. I also liked how it ended emotionally for the characters.

I highly enjoyed this book. I recommend it to people who like well-paced mysteries that will take them for a ride and also to fans of Indian mythology.