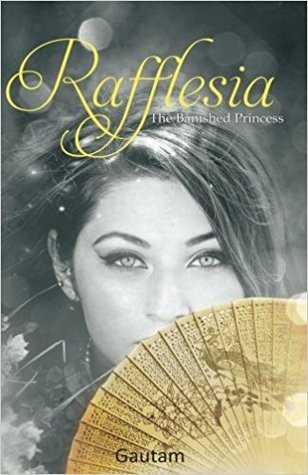 Rafflesia The Banished Princess is the story of Appu’s life and struggles. It starts from his childhood and tells us about the bonds and friendships he makes throughout his life. His favorite story is that of a princess called Rafflesia and when things get tough, he wishes to stay in the story forever.

Before starting the book, I thought it was a fantasy book about a princess and that it might have something to do with a circus but the book has nothing to do with all this. The blurb and the title are very misleading and I feel they are pretty much irrelevant to the entire book.

The book doesn’t really have a specific plot around which it is centered. It is mostly the narration of Appu’s life and is told through multiple timelines. The story does get very very interesting. I was constantly waiting to see what the role of the storybook Rafflesia is in Appu’s life.

The main themes of this book are family and friendship and there are a lot of friendships in the book. The most important is the one between Appu and Rahul. The relationship between Appu and Rahul’s family was also very interesting. They were close but there were some problems beneath the surface. Both of them had financial differences too.  The relationship between siblings is also an important part of the book.

I loved the setting of the book. A large part of it is set in Netherlands and since I haven’t read any book that takes place there, I really enjoyed that. I loved how it moved from Netherlands to a lot of different parts of India.

Even though the book is fast-paced, it seems to drag on because of its long descriptions. A lot of stuff seems unnecessary and sometimes it just goes on and on.

The writing is quite good and very fluid. There were some problems such as the use of exclamation marks at inappropriate moments which I found very annoying,

One thing that bothered me a lot is the significance of the story Rafflesia- The Banished Princess. The importance of this story or what it is about isn’t explained until the end of the book. I was thinking throughout the book whenever that story is mentioned as to what does it mean. We know that Rafflesia is Appu’s favorite story but it isn’t explained why. Why does he want to stay in that story and why does it mean so much to him?

Despite everything, this book is really gripping and I grew attached to Appu. I wanted to know what would happen next in his life.

Appu seems to always be haunted by his past memories. There are a lot of tragedies in his life. He deals with a lot of separations. Something is always troubling him. I’m not sure if Appu’s character grows because the ending is very open and I feel that should have been an important goal of the book.

The book has a lot of lovable characters but there is an underlying sadness among most of them throughout the book.

I think the characters could have been structured more properly, Especially Appu. He is the main character but we don’t get much direct insight into his mind. He is explained as very shy and closed off in the book and that is how he feels to the readers too. We don’t learn about his feelings and that to me is an integral part of a story.

There are a lot of characters and a lot of stories in the book. Sometimes too many. There was a time when I completely lost track of what is happening in what year. It is one thing trying to create a complex story but it is another thing to just confuse the reader. I also feel like the time shifts could’ve been done better.

This book also addresses a very important issue. Through Appu’s life, it shows how difficult it is to move on in life, how a person can become an adult but still be lost in the ghosts of their childhood, how one moves on from people. It shows how death and separation can leave scars on people that last their whole life. It reminds us of the importance of family and the bonds we make in our life.

This book was a ride. It was too long, it was dragged out, it was a little on the melodramatic side but I really enjoyed it. I found the concept of the book really good, I was captivated by the story and I always wanted to know more. This isn’t a happy or exciting book but it is and beautiful in its own way. It was like a long mystical story. I think this book can also be termed as a coming-of-age story.

This book isn’t for everyone. If you like long stories that are centered around the life of one single character, then I recommend this book.

“I received a copy from Writersmelon in exchange for an honest and unbiased review.”