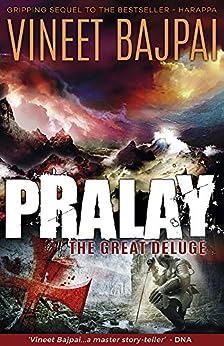 First of all, I would just like to appreciate the author for providing a summary of the previous book right in the first few pages as this is always useful while reading a fantasy series.

The second book of a trilogy is always tricky. It can sometimes be boring and just a filler book as it takes place after the introduction of the story and before the final ending. I had high expectations from this book as I had loved Harappa and I was not disappointed.

The plot of this book takes an unexpected but very interesting direction. Just like the previous book the story is narrated in multiple places and time periods. There are action-packed and thrilling scenes one after the other that kept the plot exciting and intense. There was also an equal amount of fantastical elements and mythology in the book. Many creatures from Indian mythology were introduced. There was a lot of spine-chilling action. It was evident that an extensive amount of research on history, mythology, and different religions was done and included in the book. There was negligible romance which I thought fit perfectly with the book.

The writing of this book was more advanced and fluid as compared to the last book and I started loving it as the book progressed. The intense scenes were described very vividly to paint a clear picture in the reader’s mind. The book is fast-paced and very easy to read.

There was not much character development in this book as it was mostly plot driven. Some new characters were introduced. I thought the concept of a character becoming pure evil from being almost a saint was fascinating. The characters also talked about other topics than just the main plot such as the basis of religions, what they originally meant and how humans twisted their meaning, Every character played his role in the book and I’m excited to see their fate in the next one. I also liked that the book wasn’t completely focused on Vidyut and we see how each character plays their roles and not just the hero of the story.

Despite all this, as the book progressed, I felt like there was definitely too much going on and it was hard to keep up even though the author wrote in a clear way,

I highly enjoyed reading this book. The ending had surprises as I expected and I am extremely excited for the next book.

This book will appeal to fans of fantasy, mythology and also thriller. It is an amazing blend of these genres. This is a book I would love to see on the screen. It did not disappoint and is an excellent sequel.

With an extensive but intriguing plot and flawless writing, I cannot recommend this book more.

This book review is a part of “The Readers Comsos Book Review Program and Blog Tours, for details log on to “http://www.thereaderscosmos.com/”