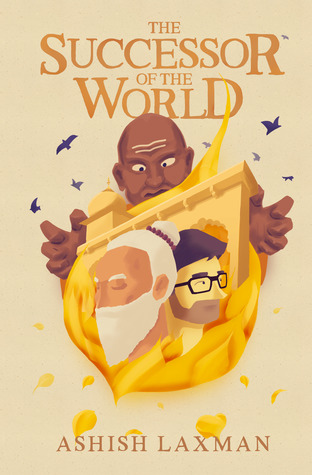 Sage Anutaapa is crowned as the all-powerful successor – the ‘Apaursheya’ of the world to set right the path of religiosity for several thousands of years to come.

Audin Stewart, 30, an atheist of British descent, brought-up in India, is handed over a mysterious gift buried in the backyard of his house in Delhi.
Would Audin reestablish the broken legacy of the ‘Apaursheya’?
Or would he fall prey to Indian mysticism?
The dusty paths to the Jahgarh fort of Rajasthan shall reveal.

The successor of the world is a novel about self-introspection and destiny.

The story begins when the main character Audin Stewart is left with his father’s diary who has just passed away. The diary tells Audin about a set of plates with mystic powers that have been like a curse to his family. We are also taken to 7000 BC when Sage Paramhansa chooses Anutaapa as the successor of the world.

I found the two plot-lines very intriguing and the way they were interconnected was also very interesting. I was fascinated to know what would Audin do next and also to know how the story of Anutaapa would fit in. I loved the small story about the most prized possession. This is a very philosophical book. I liked and agreed with some of Audin’s thoughts and ideas. I appreciate the fact that this book makes you introspect. However, I felt that some of the discussions went on for too long.

I both liked and disliked Audin. I liked that he questioned everything and I disliked the fact that he seemed to be too far removed from reality. Also, there was no mention of his grief over losing his grandfather.

I really liked the writing style of the author even though it took a bit of getting used to. It was not simple and monotonous like a lot of debut novels. The author also used a lot of metaphors. The plot is fast-paced.

The ending came with surprises. I highly enjoyed this book. It kept me engaged and was something different. It was not only entertaining but also thoughtful. I would definitely recommend it.