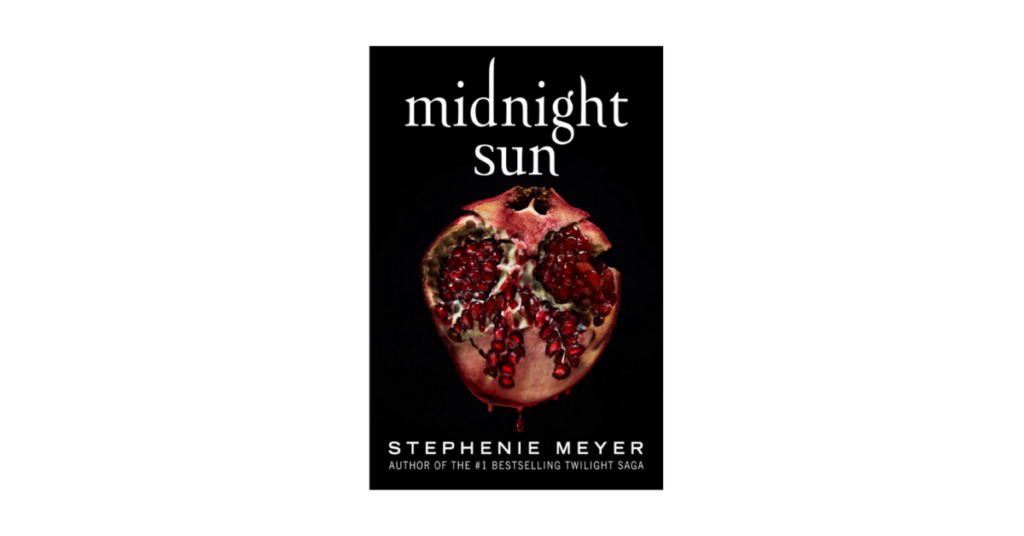 Okay, maybe it didn’t dazzle me to point of completely losing my sense of self-preservation, but it certainly impressed me.

This isn’t going to be a proper review. I just really enjoyed Midnight Sun, and I wanted to talk about it.

The reason I say that Midnight Sun was impressive to me is that it is very cleverly written. I am certain that if we had gotten this book back when it was supposed to be originally published, the book wouldn’t be half as good. Let me explain why.

Throughout the years, Twilight has been dissected and analyzed. It has been praised for the revolution it bought in young adult literature and it has been criticized for showing a problematic relationship. When I heard it was going to be released this year, I wondered how Meyer had tackled the criticism the series has received. Did she choose to ignore all of that and continue narrating the story? Will she acknowledge the problematic aspects or try to defend them? Will she just give us a narration of events from Edward’s point of view without any additional insights about him or Bella? What she ended up doing, in my opinion, was perfect.

Meyer didn’t try to hide who Edward was. She showed him as the creepy vampire who is foremost, instinctively bloodthirsty. In this sense, I could relate him more to Frankenstein’s monster than a beloved YA love interest which he has become.

In Midnight Sun, we see that Edward knew the things he did were wrong. He knew it, and he did them anyway. He was acknowledging that he was being creepy and stalking Bella. Does acknowledging that redeem his character? No. But it justifies Midnight Sun being published in 2020 when we are not tolerating any problematic BS whatsoever. I think acknowledging Edward’s vices is so much better than if Meyer had just made him a completely delusional character unaware of his actions. And as an author, she didn’t try to justify his actions. She showed his conflict and his own acceptance of his behavior. It’s not ideal but it’s something.

Edward, in Midnight Sun, gave me more insight into Bella’s character and personality than I gathered from reading the entire series for the past few years. This is partly due to the fact that the series was through Bella’s eyes and well, her perspective on things wasn’t the best. This is also partly because the series has had years to grow and be scrutinized and so has Bella. After reading this book, I don’t like her more, but I definitely understand her better.

The complexity and complications of the human-vampire connection were shown very well in Midnight Sun.

I finally got it. I got why these two people made sense together. The reason Bella Swan fell in love and gave up her human life for a vampire is that she just wasn’t a normal human being. She looked like one— a high school teenager, a lovesick, and a slightly insecure person. But the truth is Bella inherently didn’t have a sense of self-preservation. She really never thought of her safety first. She weirdly fit into the world of vampires and was attracted to them as no other human ever was. This book made me realize that even though Edward is not a normal good guy, he is obsessive and intense, it is Bella who is the weird one and not Edward. Edward was a vampire. He thought and behaved like one. He was creepy but well, vampires are creepy.

Now coming to the parts that I simply thoroughly enjoyed.

I couldn’t be happier that this book was more than 600 pages. Just getting a narration of the same events after we have waited years and years for the book wouldn’t have been fair. There were incidents, dialogues, and insights that weren’t there in the series at all. I got answers to so many questions I had in my mind all these years.

We finally got some details about Bella’s life before forks. I always that it was strange that she barely talked about the 17 years of her life before coming to Forks. Her friends, job, school, etc. All that doesn’t just disappear from your mind when you move to a new place. Bella and Edward play a 20 question kinda game in the first few chapters. There were detailed answers to all those questions Edward asked her and some that weren’t in Twilight. This made Midnight Sun and their story so much richer.

It was really interesting to know the extent of the tensions that Edward had with his family when he started liking Bella. This book showed just how badly they were against it and how worried they were, and that it was actually justified.

Another thing that I found interesting was reading about just how close Bella came to dying and exactly how critical the James incident was. Bella’s mind didn’t grasp the gravity of that, but Edward’s did.

What I didn’t enjoy reading was the carrying on strongly of the ‘she’s not like other girls’ trope in this book too, and reading about Edward’s murderous instincts towards any men who looked at Bella.

I have to appreciate Stephenie Meyer for the changes she made to make this book to make it appropriate to be published in 2020, for additional details about the Cullens, and also narrating small events that didn’t happen in Twilight, making Midnight Sun feel like a fresh book.

Happy Here and Now: Lasting Happiness You Can Count On by Matt Tracy – Book Review

7 thoughts on “Midnight Sun by Stephenie Meyer Dazzled Me”