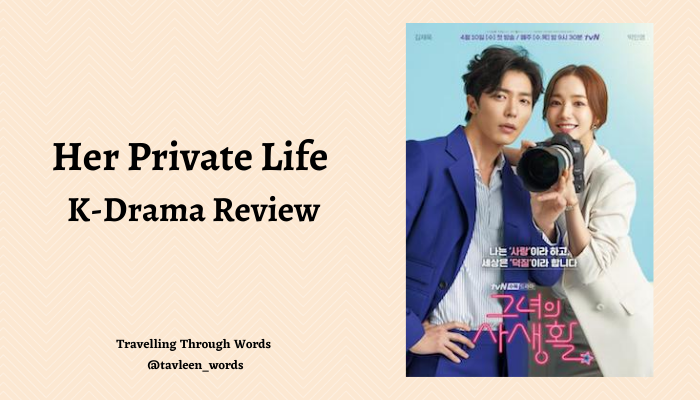 Hi everyone! So, I’m quite new to the world of Korean dramas, Her Private Life being only the third one that I’ve watched. But I can honestly say that I’m firmly invested in this wonderful world now, thanks to my friend Hargun (who has some amazing posts on k-dramas on her newly launched blog – do check it out!) who loves all things Korean.

Okay, let me just start by saying how much I absolutely loved the fashion. Deok Mi and even Ryan’s dressing style is something I would like to copy at some point in my life.

Coming to the characters, I loved Deok Mi’s personality and how the writers of the show portrayed her. You can be a hardcore fangirl and that doesn’t mean you’re not smart, ambitious, or that you don’t pay attention to other areas of your life, or that you’re removed from reality. It’s just one part of you.

The biggest reason I loved Deok Mi so much was that she was simply a kind and loving person. She had no malicious thoughts towards anyone and she didn’t want to hurt anyone either. She was mature and patient. She embraced the parts of her that others found weird and she was self-confident. She was also a great partner to Ryan. Right from the start, she didn’t take any shit from him, and neither did she fawn over him no matter what a hotshot he was. She’s supportive towards him and patient with him, especially with the trauma that he deals with. She’s a mature person who’s fun and well-balanced.

I really liked how well their romance was written. There was good communication and no silly misunderstandings, no forced breakup or outbursts of emotions. It was a relationship that naturally became stronger as it progressed.

I found all the side characters fun and interesting as well. I didn’t feel bored at all while watching their sub-plot lines.

I liked how Cha Shi-an was shown as a very normal and bubbly kid, kinda to show that celebrities are also just people. I also liked how Deok Mi comes to see him as just a normal human while still being a fan of his.

Deok Mi’s friend, Kang Seung-min was an interesting character too – a girl who had to get married young and who also comes from a super rich family. And is also a fangirl. The show showed a very harsh reality when they depicted that she couldn’t leave her husband no matter how angry she was at him because they had a kid and how that leaves you helpless in a marriage.

In this drama and also in the one I watched previously (Because This Is My First Life), I loved the portrayal of female friendships. It’s exactly what needs to be shown. When you’re going through something, your girl-friends know what to give you – a tough talk, a hug, a distraction, or a drink with them. In some books and movies, I have seen that after a breakup, the first thing that the best friend recommends is rebound sex. And to be honest, that’s not very wise. No friend thinks of the healthiest option for their friend and recommends that.

This is such a well-written and layered show. There’s every emotion. There are funny moments, loving and cute moments, profound moments. Every character is taken seriously and shown as a human, even down to Cindy and the kid who’s judiciously learning Judo.

While the ending was enjoyable and satisfactory, I felt that it was overdramatic. I also feel like Ryan got over the stuff that he finds out about way too quickly. Maybe it was because he was indeed a 30-something mature adult and that’s why, but still.