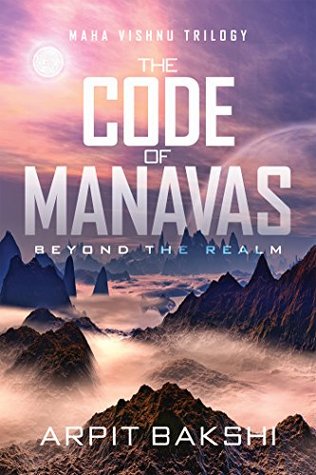 “When the sole purpose of existence becomes existence itself, does it not defy the very purpose of higher living?”

The Code Of Manavas: Beyond The Realm by Arpit Bakshi is a Science-Fiction, post-apocalyptic book set in the  year 2050. It is an amazing mix of Indian mythology and futuristic technology. The book follows Krishna, a scientist who saved the world in the last apocalypse by inventing a substance called bhoomidium. Once again, his people are in danger as the bhoomidium levels are depleting rapidly. Krishna saved the human race before and now he has to do it again.

I received this book in excellent condition with a very appealing cover. This is the only book I’ve read based on Indian mythology and I found the concept of a new planet (Bhoomi) with the city of Madhavpur very interesting. The idea of a modern-day Krishna as a scientist was fascinating which made the plot intriguing right from the start.

There were a few errors in the writing and some of the dialogue felt unnatural and dramatic. However, the overall writing and narration was quite good with beautiful descriptions of the surroundings.

The scientific element occupies a major part of the book which I found a little difficult to get into. It was a little hard sometimes but the explanations at regular intervals made it easy for me to get the gist of what was going on.

The book also has a mystery element to it which was surprising, but thrilling. There is not much of an emotional element as the book is not very character- driven. I really liked the various aspects with technology like the wrist phone and the vehicle Maghvan. I especially liked the character of Vallabha who questioned their way of living. She did it by saying that their way of living is boring and monotonous. They have everything planned and there are no new adventures.

“What purpose are we solving here in Madhavpur, apart from our survival? Our purpose now it seems has become to ensure that we survive to work on a purpose. Working on a purpose has become a purpose for us”

“It’s time we start leaving things to destiny. We run a treadmill in name of life.”

The book also brings out the cruelty of humans towards the nature.

“We have already exhausted all our cozy green pastures. We already have sucked Bhoomi dry of all her resources two million years ago. She nurtured us, and we poisoned her.We the Manavas were living off borrowed time.”

I loved the plot twist at the end and how things started to unfold. It made the book all the more exciting and unpredictable. The book ends with a cliffhanger, yet the conclusion is satisfactory.

Overall, the book is a great read. I really enjoyed it and highly recommend it, especially for science lovers. It has excellent world building and I loved the usage of Indian mythology. It wasn’t too much and it wasn’t completely negligible. This book was different than anything I’ve read before.