Hi! This is my third post of these  wonderful memes. The book I’ll be be writing about today is Egg and Spoon by Gregory Mcguire. Its a historical fiction, fantasy book that I recently found. I’m currently listening to the audiobook version of this book and really enjoying it. It is very well done and the narration is quite good.

Egg and Spoon by Gregory Maguire 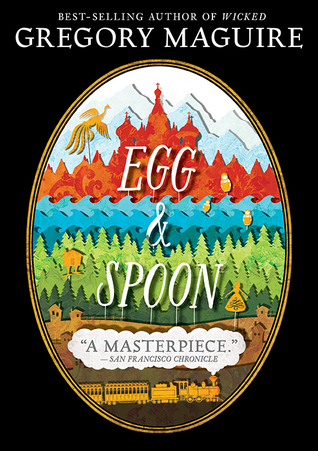 A fantasy set in Tsarist Russia.

Elena Rudina lives in the impoverished Russian countryside. Her father has been dead for years. One of her brothers has been conscripted into the Tsar’s army, the other taken as a servant in the house of the local landowner. Her mother is dying, slowly, in their tiny cabin. And there is no food. But then a train arrives in the village, a train carrying untold wealth, a cornucopia of food, and a noble family destined to visit the Tsar in Saint Petersburg — a family that includes Ekaterina, a girl of Elena’s age. When the two girls’ lives collide, an adventure is set in motion, an escapade that includes mistaken identity, a monk locked in a tower, a prince traveling incognito, and — in a starring role only Gregory Maguire could have conjured — Baba Yaga, witch of Russian folklore, in her ambulatory house perched on chicken legs

Book Beginnings is a weekly bookish meme hosted by Rose City Reader. To participate, you just have to post the first sentence of the book you are reading and write your thoughts about it.

The heels of military boots , striking ­marble floors , made a sound like thrown stones. The old man knew that agents were hunting for him. He capped the inkwell and shook his pen. In his haste, he splattered the pale French wallpaper around his desk. That will look like spots of dried blood, he thought, my blood.

Grandmother Onna wasn’t impressed. She’d just come back from scouring the Rudetsky house by lamplight, and her old eyes were sharper than ­Elena’s. She’d found a cupful of oat mash hidden in a tin matchbox, and she shared half with ­Elena. “The Tsar to his veal, and we to our meal,” she said, smacking her lips.

Egg and Spoon by Gregory Mcguire

0 thoughts on “Book Beginnings and The Friday 56 #3: Egg and Spoon By Gregory Mcguire”